My pride and joys 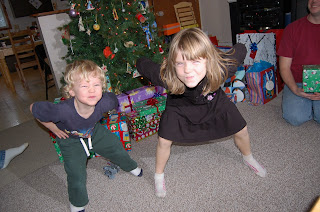 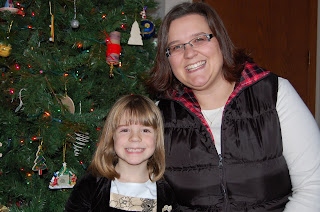 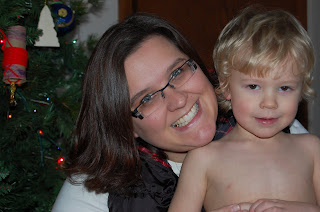 Will you be making some? I'm not sure how I feel about New Year's resolutions, to be honest. On the one hand, I don't think I've ever stuck to one, so therefore I think they are lame. However, I also think having a goal setting, get your shit together, time out once a year is good for one's soul.

*Get back to writing (blogging regularly)
*Laugh more
*Be healthier
*Jog, not walk, a 5K
*Let go of things that I've held close to my heart for years that don't matter anymore
*Attempt something completely new for me (not sure what yet)
*Get back to bellydancing, which I also have neglected in 2009
*Enjoy my family more
*Learn more about my camera and utilize it to take some fantastic photos in 2010
*Pay off debt, which we are well on our way to doing
*Be that much closer to buying a house
*Remember loved one's birthdays this next year, something I've sucked ass at this year and last
*and more and more and more, I'm sure

I know I need to declutter my life and prioritize the important things. This year, I've had so many balls in the air, juggling ferociously, that many have dropped and had to be picked back up. It has not been one my more stellar years. 2010 has the promise of so much more.
Posted by ~Denise~ at 9:01 PM 1 comment:

For My Fellow Twilight Fans

If you missed Taylor Lautner on SNL the other week, you have to check this out: Team Edward

NBC is taking the vids off youtube as it goes, so if this one is not longer available...search for Taylor Lautner SNL Team Edward. The one I linked to on facebook is now gone, and the other one that's on youtube now is reversed, so enjoy this one with subtitles.

May you and your family enjoy a wonderful holiday season!
Posted by ~Denise~ at 10:03 AM No comments:

I just noticed I'm still reading book #48 (I started the other week, but haven't made any progress in the last week and a half). Can I get 4-5 more books in before the year is up for my 52 Books in 52 Weeks?!

And this week will be OVER! Thank goodness. It's been a bitch of a couple weeks at work...but deadlines are almost here (Thurs & Fri), hopefully I'll have everything wrapped up by the end of the day on Fri.

And great bejeezes, Christmas is a week away!!! I know it falls on Dec 25th each year, but this really has snuck up on me.

Any good gifts out there for your loved ones? I've been enjoying my iTouch from Jason as I received it early. The kids are getting a ton of Transformer toys, which they adore.

Hoping everyone is keeping warm.
Posted by ~Denise~ at 4:04 PM 2 comments:

Seriously, what was Tiger Woods thinking? I am a loss for this escapade, but he's got such a wholesome and good image, I fear that man may be screwed. Hey, no one's perfect. But at least I don't have millions of eyes watching what I do.
Posted by ~Denise~ at 10:35 PM 3 comments:

I said it was coming. I didn't think it would be over a month later, but tonight just feels right.

Jason and I had the pleasure and privilege to attend Saving Grace: A Night of Hope, the Preeclampsia Foundation's annual fundraising gala, in Chicago on Oct 24th. It was, again, one of the most powerful, inspiring, encouraging, and heartbreaking events I've ever attended. We know that there are more than 6 million women who experience preeclampsia each year, worldwide. Approximately 76,000 of those women die from those complications. It also robs about 500,000 babies of their lives each year. With numbers like those, I have to wonder when will the world pay attention?

Research has shown that preeclampsia survivors have an elevated risk of cardiovascular disease, and recently there has been a connection to thyroid complications down that road as well. There are days when I question what else will be an issue for me in the coming years. I already have an increased risk of heart disease due to family history, and when you add in the additional risk from having preeclampsia, my young age of 33 seems to overwhelm me when I think of my grandfather having his first heart attack at age 36.

It's easy to put these thoughts out of my head at times, you know life gets in the way. Saving Grace put things back into play and it's been a common thought recently. I'm angry that I was one of the unlucky ones. Angry that what everyone thinks is something that goes away after delivery, may cause me issues years after my pregnancy.

However, I know that while I was one of the unlucky ones who preeclampsia decided to visit, I am so extremely lucky to be here. As are my children. I survived and so did they. The countless mom's who leave the hospital with empty and aching arms are not so lucky. The babies who will grow up without ever knowing their mother's touch or voice as she reads a story, because their mother died from this crazy thing called preeclampsia. It's those stories that I will not allow myself to forget.

Sitting at a table at Saving Grace, we viewed the slide show of families who suffered from preeclampsia. Some had wonderful outcomes, others lost too much. I had submitted our experiences and even though I knew it was coming, it still caught me off guard. There we were, a family of four. The photo made us look happy, and yes we were. But there was no way to tell through that photograph, if someone just randomly looked at it, that one could tell things were touch & go with our first pregnancy with HELLP Syndrome and that we were subject to careful and close monitoring of our second pregnancy that ended with an induction and a placental abruption scare during delivery. The happy faces on that photo are what got to me. To know that our lives have the happy ending and others do not.

It's not fair and it pains me to see how others have suffered their losses. I weep when I learn of a mother who does not have the opportunity to see her child grow up or when a mother loses her own life. I feel guilty when I learn of those losses and I make the silent acknowledgement to myself that I was one of the lucky ones. I vividly remember reading my son a bedtime story shortly after reading that a MN mom passed away from complications from HELLP Syndrome this fall. All I could think of, as I attempted to continue the story without falling apart, was how her son will feel as he grows up never knowing his mom. And it broke my heart. As I broke down later that evening, Jason told me that there was nothing I could do to fix it. I told him I was upset because it wasn't fair. Why did she die and I got to live? Why did I get to bring my babies home with me and be able to hold them in my arms? It's not fair and it just sucks to not be able to go anywhere with those thoughts.

A young man spoke at the event, a talented and bright young man. One who was born 13 weeks too soon because his mother developed preeclampsia. Due to his prematurity and the complications he suffered, he was diagnosed with cerebal palsy. His story was the tear jerker of the night. He stood there, proud to be alive and sharing his story, but also crying as he spoke of the hardships life has given his family. He represented all of the children that evening, who's lives have been touched by preeclmpsia. Watching him made me feel as if I were punched in the stomach, I had such a difficult time breathing as the fear of the "what if's" resurfaced. I know my children are here and are healthy, but the ever present what if's remain, hidden deep in the recesses of my mind.

Another family was honored for their service. What brought them to the organization was the loss of their daughter as she developed HELLP Syndrome while pregnant with their granddaughter. Shelly died in 2005 and those of us who have been involved with the organization for that long have had the opportunity to watch her daughter grow. She attended the event and was on stage while her grandfather held her. I am in awe of individuals who have suffered such loss and then use that experience to further awareness and the need for a cause & cure. All the while, being thankful that my story is different.

Survivor's guilt. Other survivors and I discussed it at Saving Grace. It's there. It's painful and then you feel even more guilty. It's tremendous, but I'm also thankful for it. It allows me to remember our experience, be grateful for our outcomes, and to serve as a tool to continue my efforts in volunteering my time with an organization who is dedicated to finding a cause and a cure for the disease that has been around since the time of Cleopatra.

This year's program was filled with the stories of those affected by preeclampsia. I do have a few extra copies if anyone would like one. To read the stories of these families is powerful. Each one unique, but each of us connected. These stories will hopefully allow others to become aware of the dangers of preeclampsia and inspire some to volunteer or to do research that may one day put an end to all of the unlucky experiences. 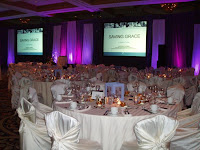 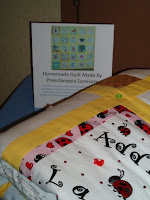 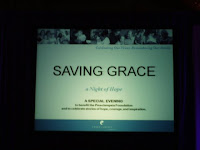