A close friend of mine  participated in the 2011 Ironman Wisconsin race two weeks ago.  And I was fortunate enough to be there to watch him and a few other folks, say about 2500, give their all.  What an amazing day to witness.  The perseverence, the sweat, the tears, the pride.  The day was powerful, amazing and left me awestruck to what these individuals do with their bodies.

Here are some of the highlights from the day.....

My friend gave it his all, however he ended up passing out at approximately mile 9-10 of the marathon portion and was transported by ambulance to the med tent where he spent the next 3 hours or so receiving IV fluids.  It was heartwrenching to see him process the day later that evening and then throughout the following week, but my friend is a go for IMWI 2012 as of this week!  So, we'll be back in Madison for the race next year.  His training this year was rather short for triathlete standards and he's laying a plan for training in 2012 that should have him finishing this race in 2012!
Interested in seeing what Ironman is all about?  Check out: 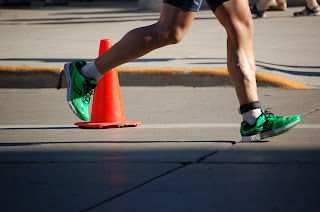 That is what my life feels like most often right now.  I haven't blogged as I just haven't had the heart to.  I would much prefer to keep things hidden or private in a sense, but I know it's not helping.  P had his evaluation and he does not have ADHD, of which I am happy about.  The doctor believes he is so sleep deprived he essentially manifesting ADHD symptoms:  the impulsivity, lack of focus, hyperactivity, etc.  He would like P to have a sleep study.  Awesome.  But the pediatrician's office will not refer until they receive the report from the neuro/psych doc.  And our local sleep center does not work with kids his age, so we need to travel 45 minutes to another sleep center.  (I know, it's not that big of a deal).  That place will not speak with me about an appointment at all until they receive the pedi referral.  They would not even tell me if he has to see the pedi neurologist first before a sleep study is scheduled or if he can do the sleep study right away or even how far out they are scheduling.  In the meantime, we have a little boy who is struggling.  And so are his parents.  Four days of school so far = 2 incident reports sent home.  Non-compliance, aggressiveness, not wanting to participate when he's asked to.  And we don't know what to fricking do anymore.

Let me share that he while he's a very active kid, we were not having this large of issues while he was four.  Yes, there were some minor things however things have ramped up over the summer.  And he's sleeping worse than ever.  He is more often than not having a night terror every night.  Then he's usually up 3-4 times.  We've taken to taking turns sleeping on his floor in desperation of soothing him and making him feel safe (cuz he's scared) and to allow the other parent a decent night's sleep.

He has been seeing a therapist for several weeks now and there have been improvements.  Earlier this summer we were battling him almost nightly, now it's 1-3 times a week.  But he's also bitten a teacher at summer camp and hit at his teacher today.  We've learned through therapy that he likes to have control, which could be a terrific leadership quality if we can harness it right.  There are days when we make awesome headway and then bam, then the next night he just disintegrates into this upset, hysterical child before my eyes.  There are times when it is difficult to recall the improvements and that alone is frustrating.  We have been working with a therapist as well for parent training, which has helped.  We still have a long way to go.  And while I know there is no magic wand to instantly make things better, it does not stop me from wishing we could solve this, right now.

I am feeling a major sense of being out of control.  I am fully aware that I need to control a large portion of my life.  I always have.  But I have only admitted that recently.  I know the anxiety that is felt when I am not in control and can relate to what he is feeling.  However, while I turn that inward, he turns it outward against us.  J said it perfectly the other month, "it's very humbling to have your ass kicked by your 5 year old."  Now this was when things were literally at their worst (so far) and we had been hit, kicked, spit on, snotted on, pushed, had things thrown at us.  We've learned that when he enters that stage, we cannot engage him.  Or hug or touch him.  It will only increase his emotions.

I am struggling because I do not know how to help my child.  And that pains so much.  I know he is a terrific kid with some issues.  He has a beautiful zest for life and is my cuddlebug.  But if you piss him off, what out.  And that scares me.

Things have been tense between J and I.  They came to a head a few weeks ago and during a long heated discussion, I leveled with him that things need to change.  It was so difficult and quite an emotional communication, but it was so necessary.  Emotions were raw and I told him I was not happy.  And that if things do not change, I will not be with him in the years to come.  We have both been working on things, which is great.  But it is still a struggle at times.  I snap at his tone of voice or he gets defensive when I say something.  We just celebrated 13 years of marriage and we have been through a great deal together, so while I told him I'd leave if things did not change I also stated it would be one of the most difficult things I'd do.

To top things off, my day job is sucking the life out of me and I am allowing it to happen.  Morale at work is so low and a job I enjoyed has become one that I loathe stepping through the doors each morning to do.  I feel guilty that I am working when possibly being home to focus more time on P would be better for him.  I feel as if I am in a constant state of "fight or flight."  And I know it is not healthy.

I'm hoping to make some changes in addition to all of the ones above, things that keep me healthy.  I know it is important and needs to be done in order for me to effectively help others in my family.  I need to carve in time daily that is just for me.  And to start enjoying life again rather than have it seem like a chore.
Posted by ~Denise~ at 9:10 PM 1 comment: