...we had this neighbor. His name was Al. And he was scary. We lived in a beautiful, but old, apartment during Jason's college days. The place had lots of charisma, but across the hall from us was Al and his woman. He was scary, together they were freaky weird scary.

Let's see, how can I adequately describe Al. Al was like the poor man's version of this guy. 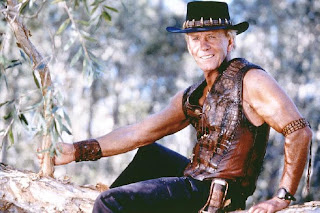 I'm not joking. He wasn't in all leather, but had the hat, and a vest. And occasionally had a long ass knife like that at his side. No, really. I'm serious. He was quite the odd duck. Or croc I guess you could say. (wink) He had a goat before they were cool, and even when they did turn cool I'm certain his was not cool.

Al owned this awesome van. It looked kinda like this... 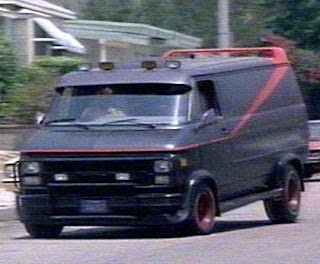 Except shittier. And it was painted with purple & blue striping. Hand painted, not body shop painted. And we'd come outside to see him coloring in the black plastic sun shields on the back windows or doing a little pin striping with these... 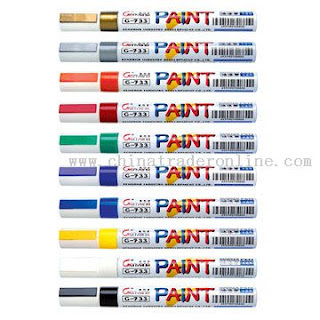 For real. He would use paint markers, metallic in color, to touch up his Al-mobile. To top it all off, he had horns in the front window of the van.

Yep, I'm seriously NOT joking. Real fucking steer horns. And if I remember correctly, probably a skull or half naked lady air freshener hanging from the rear view mirror.

They knocked on our door once to ask for help moving a dresser up the stairs. How could I say no without being a complete bitch? So, I helped him carry this heavy-ass dresser up the stairs and into their apartment. I was happy to escape and turned down their offer of refreshments. Our apartments had these bay windows, and theirs was filled with some kind of shrine it seemed. And there were some of these around their apartment.

I'm all for individual taste, but decorating with skulls just ain't a good thing. Ever. Except for Halloween. But beyond October, forget about it.

Jason's bedroom when he lived there with some buddies (prior to me moving in) was directly next to their bedroom. the headboards of each bed shared a wall. A rather thin wall. One night about 1am, when I was spending the weekend, we had the most unpleasant experience of listening to them have sex. It took everything we had not to laugh out loud. It started out with her moaning and then turning to repeated "Oh god, oh god" over and over. And over. Come on lady, get on with it! Finally, she let's out a giant "Oh God!" and we hear this guttural snarl/belch/noise. It's Al, and he's finally cooked his goose. Thank god they were done!

We still remember Al and the van, and the horns, and the knife, and the sex. We chuckle about it yet today.
Posted by ~Denise~ at 11:35 PM

That IS funny! It's fun to reflect on the craziness we went through in the past...