I was busy doing dishes while the kids were playing in the living room. I had run into another room, and upon my return to the kitchen saw the cupboard door open. No biggie, one or the other is always taking something out of there. Pretzel bag, cereal box, or the giant (almost empty) container of canola oil are the top items. I thought nothing of it and continued on with the dishes.

Then I hear Ariana exclaim, "Phee Nee, no!"

And I hear this sound. Like a quick waterfall. I recognize it without knowing for sure what is falling to the floor.

Shit, I think, hoping for something that would be easy cleanup.

I turn around and there is the gigantic box of Rice Krispies in his hands. He's holding it up in the air like he just one a huge trophy, and he's got this smile on his face. You know the one, ha ha mom I got you! Of course, it was the largest box they sell, minus the 6 cups I had used to make bars the other day. It was still pretty full.

I sigh. "Phoenix, that is naughty. Help mommy pick up."

To which Ariana replies, "No, we're puppies and we'll eat it up." And thus they proceed to lap up 10,000 little krispies that fell half on the kitchen floor and half on the living room carpet. Phoenix is delighting in picking them up where they stick to his slobbered on hands. He wants to share with mommy. Lovely.

I can't resist laughing. I take a photo with my phone and immediately send it to daddy so he can see. He thinks it's hilarious. He doesn't have to clean it up. ;)
I also break out my camera and take some candids of my kids having a blast with 10,000 krispies.

I take my time getting the broom and dustpan as I know this is a wonderful moment for them. However, my water is getting cold in the sink so cleanup is a must. By now, I have rice krispies all over the living room and kitchen floors from Phoenix tracking them around on his bare feet.

They were quite disappointed when I swept them all up. 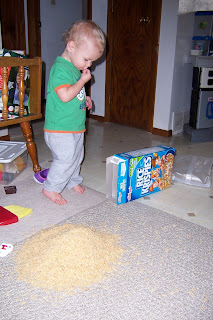 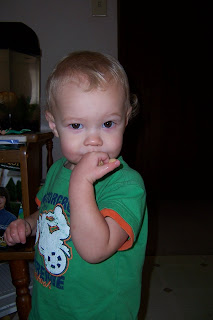 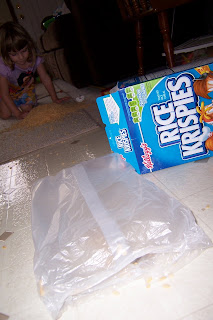 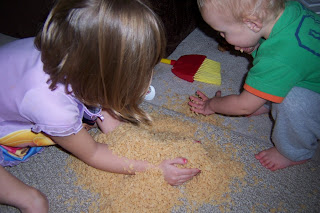 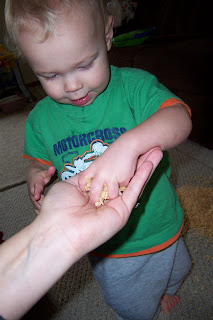 Denise,
Thanks for stopping over at my blog.
This post made me almost spew! Just the other day I found the container of Cheerios had been filled with the remainder of the half gallon of milk by my two year old.
No cereal for anyone that day. I had to throw out the whole container.
Sonic breakfast for everyone!

On another note, I saw a shirt the other day that said, "If you wont stand behind our troops, they'll be happy to let you stand in front of them."
Thought it was a great 'Support our troops' shirt!

That's GREAT!!! How nice you remembered to take pics and appreciate the moment.

(At least it wasn't Grape Nuts!)