If you are anything like me, you are wondering what exactly the hell is dermatitis herpes what? Dermatitis herpetiformis is a condition that occurs often when someone has a sensitivity to gluten, or wheat.  And apparently this is what I've developed.  Total awesomeness.  I think my second reaction was, well, fuck me.

I awoke in the middle of the night the other week with an intense burning itch on my inner forearms.  I put cold water on them and went back to sleep.  In the morning, I saw a couple of red spots but nothing major.  The next night, I awoke to the same itching except it was on my outer forearms and hands.  These pimple-like red spots that made me want to rip my skin off.  In the morning, I still had some spots and then my chest broke out a bit.  I had just started a new shampoo and thought perhaps I was having a reaction to that, so I stopped using it.  And then after a delicious lunch of Domino's Pizza, my arms were on fire again.  I stocked up on an antihistimine and itched at varying times over the weekend, most often after I finished eating.  Monday, I called the doctor and they scheduled me for Wednesday.  In the meantime, my arms looked horrendous.  My coworkers teased me that I was a meth addict.  Turns out those spots are like small blisters and my itching made them all pop, bleed, and scab, and then bleed some more when I itched again. 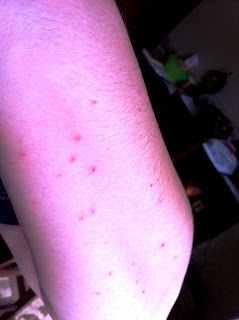 Nasty, right?  I am embarrassed to show my arms.  Turns out, the doc thinks I have a gluten intolerance, sensitivity or full blown allergy.   I had celiac labwork done last year as she suspected I had an issue with gluten, however my bloodwork was just within normal range.  Unlike A's, who's labwork was competely wonky and then upon the biopsy, turned out she has no damage to her celia and thus no celiac.  But I digress.
The doc's daughter discovered a gluten intolerance in this exact fashion a number of years ago and now breaks out in this "rash" when she even has just a few bites of wheat.   Did I mention, it looks awesome?  So, my doc prescribed a gluten-free diet for the next 6 weeks until I see her again.  Um, can I admit that I about cried when she told me no bread?  Cuz, that's true.  I'm a carb addict.  I left the office wondering what on earth I will eat now, stopped at the bookstore for some gluten free books and then onto the grocery store for some gluten-free foods. 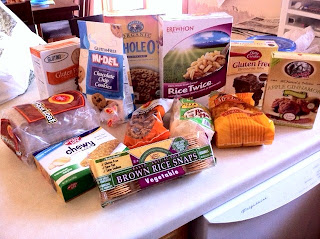 If you haven't priced out gluten-free foods....they are frickin' expensive!  I knew I'd need some snacks and thought I'd try out some different items.  Now, I know I can still eat meat, fruits, veggies and lots of other food.  But I also knew I'd need some "quick" items to eat.  I discovered over the weekend, I can still do my chips & dip (yay-fucking-hoo!!) and the noodles are not all that bad.  I am on the hunt for more information, recipes, tips, and more as this is quite the educational experience for me.  I've run the gammut of being pissed off, depressed, and more about it.  I have noticed that I actually feel better over the last few days (I've been gluten free since Wed last week minus a few mistakes/sneaks), which is awesome.  I did have some french fries with lunch today and wow, within the hour my stomach felt like shit.  No rash (thankfully), but I could tell my digestive system was not appreciative.
I decided today that I do not like the word diet when I say Gluten Free Diet, so I came up with Alternative Food Choices, or AFC's.  It is sure to be an education, an adventure and a lifestyle change.
Posted by ~Denise~ at 8:56 PM

I'm gluten free, and have been for years (I think it is either 9 years this fall or 10 years).

Good news, there is a TON more GF foods now than there were 9 years ago, even 5 years ago.

As far as breads, the only tolerable ones I've found are Udi's (which you buy made) and King Aurthur's Bread Mix (which you buy at home). These are rare treats as they are expensive and not at any stores I regularly frequent. Glutino Pretzels actually taste like real pretzel. Once again, expensive so a rare treat. Chinese food, good luck. PF Changs has a GF menu, but there are not that many of them. Although a lot of Hispanic and Asian foods are gluten free as long as they are made with gf ingredients (i.e. most soy sauces have wheat in them)

A lot of french fries have gluten in them.

For the most part, I just eat things that are naturally GF. A large part because of cost. The other large part was when I went GF, the alternatives were just so hard to come by that I got used to it.