Tomorrow will be five months since we departed for our December Disney Vacay and here is a recap because I am in the mood for happy thoughts this afternoon.  :)

The Good:  Visiting WDW during the holiday season.  It's awesome.  One of my favorite times of the year to visit the World. 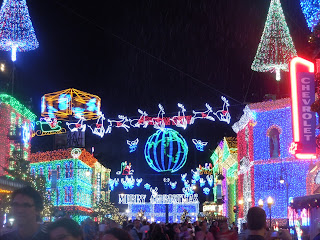 The WTF:  Two days before we leave, we learn that our airline tickets have been "cancelled" according to Delta.  They said we had cancelled the flights right after my dad made them in early spring 2012.  Raaaa-ight.  I don't think so, check the glitch in your computer.  Panic.  Almost my biggest freak out, evah.  My dad works to get us back in business, but it will be an adventure from the sounds of it.  No assigned seats, no seats from MSP to our local airport so we'll have to drive.  Just get me on vacation!

The Surprise:  The next day, my dad figures out he has enough reward miles that ALL of us can fly FIRST CLASS!  Yes, my loud, energetic kids flew first class.  And they were awesome on the flights!!

The "Oh Shit!":  Fifteen minutes prior to leaving for the airport, Jason asks if I have our annual passes.  Um, nope.  Totally spaced it out.  Went to get them out of the small safe and discover the key is broken off & half of it is left in the safe.  Panic.  Freak out #2.  Thankfully he is able to get the other half of the key lined up and the lock engages & unlocks.  Whew, panic over.  Can we seriously get on this freakin' vacation! 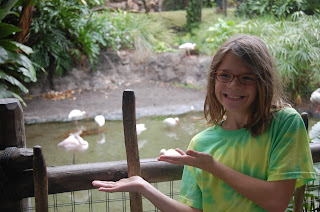 The Never-Again:  We were lucky enough to um, ahem, enjoy two family vacation in 2012.   I love being able to share WDW with my family, however what I have learned about myself and my immediate family is that we need our space.  Dealing with two kidlets who have some extra needs is demanding enough.  Add in worrying about making sure others are happy and that our kids' issues are not trespassing on them is just too much.  I will gladly vacation at the same time with family again.  However, we will NOT be staying in the same room/villa/whatever again.  It is just too stressful for me.  I have good memories of each of the vacations, but the stress of the vacations is one of my foremost memories for each.  And that's not what I want my vacations to be about.

The Good:  Kids with camera.  They each had some fun and now have added cameras to their wish lists. 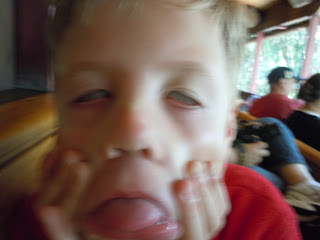 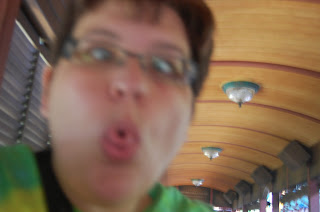 The Lesson-Learned:   Vacationing with family is wonderful, however time apart is very important.  I mean, think about it...you live with a partner and love/like that person, but not 100% of the time.  There is probably something they do that is slightly annoying, whatever.  Going on vacation with family and spending 100% of the time together is too much togetherness for my family.  We need breaks from each other to truly enjoy the time spent together.  I tell this to my Disney clients all the time, but it's easier said than done.

The Odd:  I became oddly fascinated by the theming of the garbage/recycling containers. 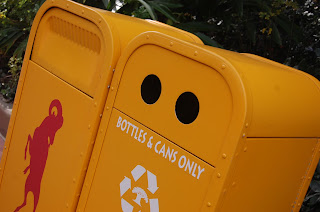 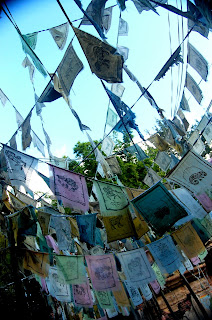 The Regret:  Not taking enough photos of things I wanted to capture.  And that just won't happen unless I get time to myself or perhaps it's just J and I.

The Bad:  Well, I guess I could say it's a good, but I HATE bird aviaries.  Seriously dislike them.   However, I went through it with my daughter to make her happy. 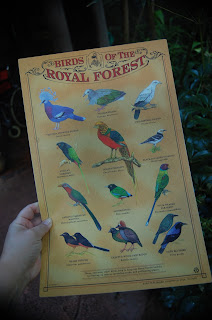 The Funny:  Getting my dad to try the Beverly at Epcot.  The kids thought it was hilarious!
The Eye-rolling:  my dad wearing a Hooter's shirt at a Disney theme park. 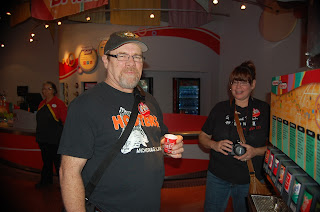 The Good:  Flowers in December, always a beautiful sight.   One of my favorite things about WDW is the landscaping and flowers.  I am always finding a new flower to enjoy and come home with loads of flower photos. 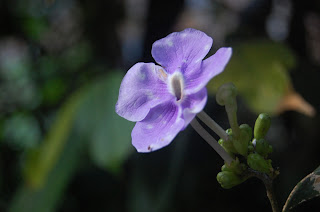 The Relief:  With issues of behavior, we were a bit worried how things would go this vacay.  And while there were a few meltdowns, for the most part the kids were awesome!  Take that SPD and ADHD!  We came prepared and with a plan to manage the stressors, the overwhelmed moments, and more.  And it helped tremendously.

The Good/The Bad:  time spent in the new Fantasyland expansion at Magic Kingdom.  Got to ride The Little Mermaid twice in a row with no wait.  But did not spend nearly enough time here. 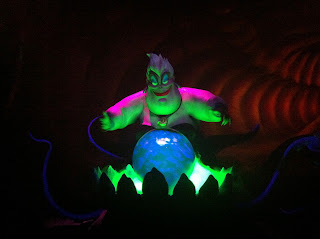 The Awesomesauce:  Taking a silly face photo while on Spaceship Earth and laughing so hard each time we see the photo during the ride.  It was almost a "pee my pants" moment.  :) 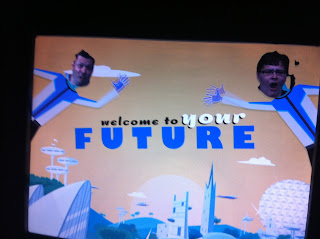 The Bad turned Good:  The kids were melting down, so were we.  We separated from my parents and were hoping to turn things around, or at least find a spot to stuff them in.  It was not one of the finer moments of the vacation, lots of yelling, sassing, eye-rolling and tears.  What a difference 10 minutes can make.  Yummy treats and coming across this performance, which had us dancing and singing in the front row.  Phoenix got to play the cow bell and ended up with a guitar pick after he told the band they were "awesome" at the end.

The Brave:  I rode Tower of Terror for my daughter.  And I was quaking inside the entire time waiting in line.  And I screamed like a little kid during the ride.  I was told by my 9yo to "face my fears" and after her doing so on this trip (and the one in June), how could I not?!


So there are the highlights.  It was a trip in which we came home with good memories and as usual, needed a vacation from our vacation.  It was a fabulous time!

I LOVE this! We are hoping to do Disney with our kids (8,6,3 and 8 months) next year. I can't wait! WDW at Christmas is truly magical! My all time favorite time to go! Sounds like you had a wonderful trip!

laugh #2 - your old man wearing a hooters shirt at disney. that has to be the greatest thing to ever happen at WDW in the history of WDW.

ps - i deleted my other comment because i spelled your wrong. f-ing hate it when i do that.